New York's congressional districts were redrawn for the most recent election. This resulted in Ithaca having a new congressman. Recently Congressman Tom Reed visited Ithaca to meet with members of the Tompkins Country Chamber of Commerce. 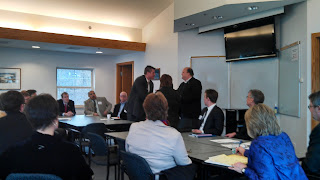 Welcome to Ithaca
Regardless of social politics, politicians want to find ways to encourage business and create jobs. Ithaca's liberal politics certainly leans away from Congressman Reed's Republican platform, so I applaud him for not ignoring this part of his constituency. Driving end to end in his district would take 5 hours, so he have a broad variety of interests to represent.

Different members of the business community spoke about specific challenges they were having with advancing their businesses, and how government could help. This ranged from health care mandates, to immigration reform, to the national debt. It was a productive conversation and both sides came away learning something new.
Posted by Brad Treat at 8:48 AM No comments: