The web's #1 VOIP blogger Andy Abramson recently ditched his keyboard in exchange for his webcam to deliver his initial reactions from the recent VON (Voice On the Net) conference in video form. 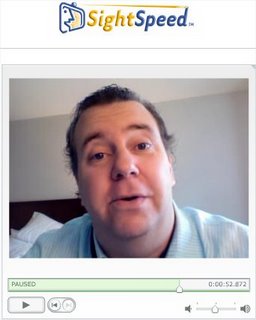 The V also stands for Video
The great thing about a guy like Andy is that by doing something as simple as creating a video mail and posting it to his blog, he created a new stir about vlogging - video blogging. Welcome to the vlogging club Andy!
Posted by Brad Treat at 8:29 AM No comments:

Woodall You Could Ask For

About a year ago my college roommate Jeff Woodall contacted me out of the blue - the power of the internet at work. In college, our little house was far enough from NC State to not be a frat, but close enough to act like one. We had a great college time! 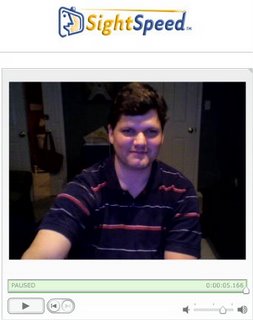 Treat, I'm talking now. This will be profound.
Jeff and I lost touch for ten years, but reconnecting with him has been one of the great personal rewards of founding SightSpeed. Were it not for all the media attention, Jeff and I might have never reconnected. Thanks media!

I visited him recently at his home in Princeton, New Jersey. After I was done extolling the virtues of SightSpeed's software, he felt compelled to create the Jeff Woodall introduction video mail. It was like Night Owl all over again.

For those of you who don't know about Night Owl at NC State (i.e. everyone) it was the nickname for the late night dining option on campus at the time. In 1991, that meant you listened to Nelson as you scarfed down the evening's chili/pizza/frutti pebbles/potato option well after normal dinner hours. Somehow the memories of the experience are more endearing than they seemed at the time. The years have that impact, which allows Jeff and I to reminisce and laugh our heads off about those days. Go 'Pack! Go N'Owl!
Posted by Brad Treat at 11:25 PM No comments:

On Monday I had the honor of speaking at Cornell as part of the Entrepreneurship and Personal Enterprise Speaker Series. 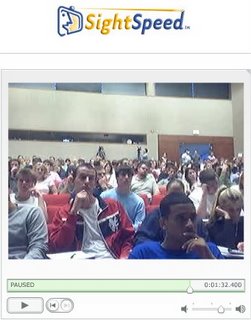 We are, We are, the youth of Cornell
I mainly talked about the origins of SightSpeed, a subject I have talked about many times before. Regardless, 450 undergraduate students and a professional film crew made for an intimidating scenario. I think it went well, but we'll know for sure when they post the video later this month. For now, here's a video mail I shot of 450 Cornell undergrads.
Posted by Brad Treat at 7:30 PM No comments:

BR Ventures is the student run venture capital fund run by MBA students at Cornell. They are also investors in SightSpeed. 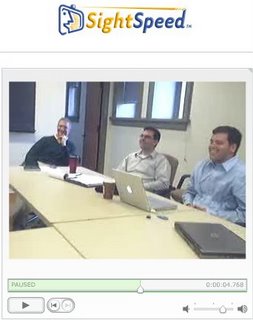 Video Mail is funny
During a recent meeting with them, I took a quick video mail of the current BRV managers. They were a little caught off guard, but it made for an authentic moment.
Posted by Brad Treat at 8:14 AM No comments: