The Story of a Hat

I recently had a fun conversation with the founder and CEO of Branders.com, Jerry McLaughlin. Among other things, Jerry asked this question: "SightSpeed bought a lot of hats from us in our early days. Why?".

For those who don't know Branders.com, they are my preferred source of schwag. The answer to "Why Branders.com?" is simply "quality, service, and cost". The "Why hats?" question is a little more complicated.

Here's my perspective on the schwag hats: They were for tech tradeshows and friends of the company. Specifically, we traveled the world with Intel as part of their "partners showcase". If you have ever seen an Intel booth, you'll know they are large, beautiful, and in the prime location at any tradeshow. We wanted to use the hats for a couple of reasons:In order to get a hat from us, all they had to do was: 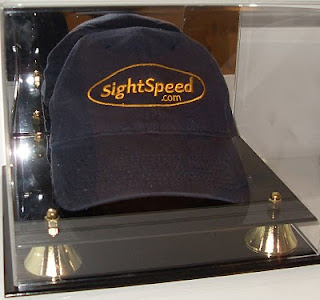 Making the case
I'll tell you three other stories with the hats:
Jerry, thanks for reminding me of those memories! All the best on selling more hats.
Posted by Brad Treat at 12:57 PM No comments: