A Congressman's view of Entrepreneurs

This week the Ithaca entrepreneurs had a chance to meet with our man in Washington, Congressman Maurice Hinchey. 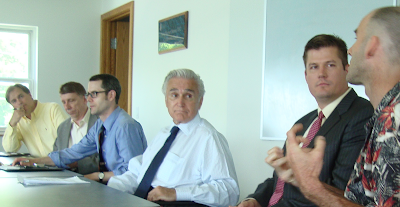 Listening to the Roots of Economic Growth

The Congressman was gracious enough to meet with an entire group of Ithaca entrepreneurs - not knowing what he was getting into. We felt the same way.

It was a good session. We asked the Congressman to help us grow the economy in the region. We also asked him how we can help him create economic growth. Entrepreneurs create a LOT of jobs, but we are largely invisible because we don't have lobbyists or special interest groups to petition the Feds. He responded by telling us that he wanted to know more, and to stay in touch.

It was a great jumping off point. We listened. The Congressman listened. Now our challenge is to grow the area together. Though Ithaca boasts one of the lowest unemployment rates in the state, we want to say "Don't ignore us and consider this area solved", but rather "We are doing something right. Let's not compare ourselves to the rest of the state, but to the rest of the country. Let's grab this momentum an fuel it to make it one of the country's growth areas"

We think he listened, and we thanked him for his time.

Thanks Congressman Hinchey!
Posted by Brad Treat at 5:59 PM No comments:

John Jaquette, Friend of the Entrepreneur

Today I had the honor of presenting the 2010 Finger Lakes Entrepreneurship Forum's Cutting Award. This is an award the entrepreneurs use to say "Thank you" to the folks who help us make it happen. This year's award went to John Jaquette. 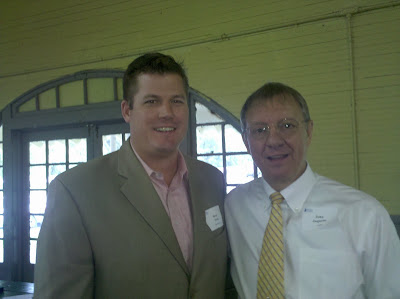 The Guy on the Right is the reason for the Guy on the Left
I love a microphone and a captive audience, so I was surprised at how choked up I got doing the presentation. I wanted to talk about all the ways that John has helped me personally, and I have numerous examples, but I was fortunate enough to be able to go to an email I received from former award recipient Tony Eisenhut. Here's what Tony had to say:

"John Jaquette personifies the true meaning of the award and exemplifies those attributes that are Cutting. He is a tireless networker who connects people from all parts of our community because of potential. There are no predisposition about the potential there is only a view towards creating a mutual benefit. This optimistic outlook and commitment to potential is one of the hallmarks of both Dave and Robb Cutting. Additionally, John has a deep love for the Ithaca area and believes endlessly in its capacity to produce world class entrepreneurs."
John is the newest addition to a list of people who have done a lot to promote entrepreneurship in the Ithaca+NY Finger Lakes region. I want to repeat my sincere "Thank You" to all of them!

Posted by Brad Treat at 9:36 PM No comments: